Freedom of expression is a fundamental human right, but companies like Blizzard and Riot are silencing gamers who speak up about their own political oppression. Sign our petition to tell Blizzard and other game companies, "Support free expression for gamers everywhere we play."

WHICH GAME COMPANIES SUPPORT YOUR FREEDOM?

We’re asking all game publishers and developers to assure gamers everywhere that they are free to express essential thoughts, beliefs, and personal experiences without fear of punishment. Take a look at the list below to see whether your favorite game publishers support your freedom, or whether they may put you at risk. Then hit the tweet button to let these companies know what you think about this important issue.

Wizards of the Coast

SEND A MESSAGE TO GAME DEVELOPERS

We’ve repeatedly asked game companies for clarification on their censorship policies, but we’ve heard nothing back. Click the button below to send a message to big companies and important indie studios. If you're unsure what to say, use our pre-written message. But game developers like to know that they're hearing from real people, so feel free to write something personal. Be polite and encourage them to be braver than Blizzard.

Join our Fight for Freedom Discord channel to connect with other gamers and activists, keep up-to-date with the latest news, and get involved with protests in your area. Gamers for Freedom is a diverse coalition of gamers, so please treat everyone with the same respect you expect from them. No harassment, bigotry, or bullying will be tolerated.

WE PROTESTED AT BLIZZCON

On November 1st and November 2nd, hundreds of gamers descended on BlizzCon to protest Blizzard’s unfair censorship. Together with Freedom Hong Kong, Hong Kong Forum Los Angeles, and countless volunteers, we handed out over 4,000 t-shirts to BlizzCon attendees. We heard speeches from members of the American University Hearthstone team that Blizzard banned for their peaceful act of political protest. We hosted a cosplay contest. We took pictures. We chanted. And we made headlines around the globe, as media outlets like the New York Times, Kotaku, and ESPN reported on our movement. 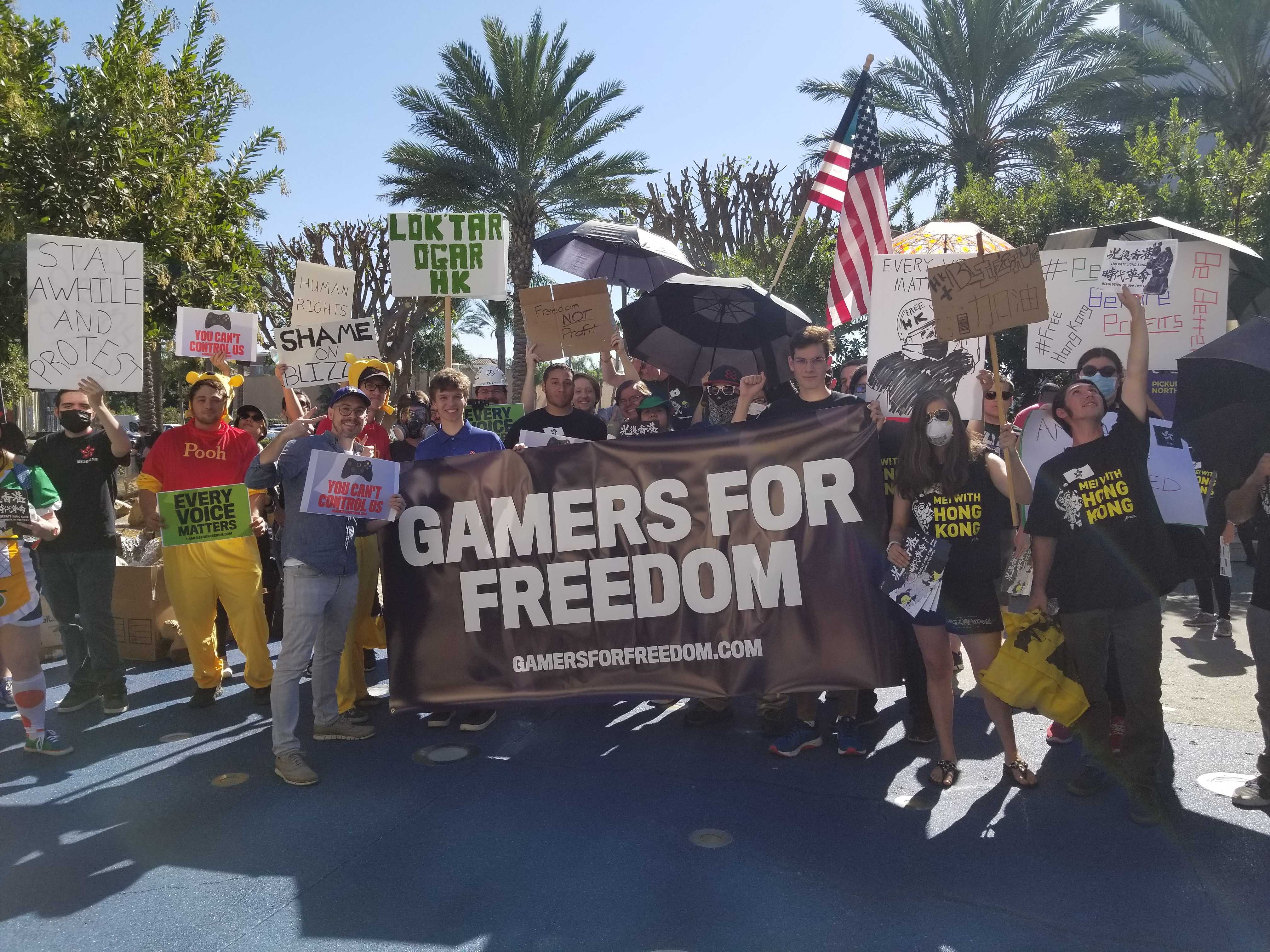 Blizzard may not believe in its own corporate values. But we do. We believe that every voice matters, so we speak up for those who are being silenced. We think globally, so we support our fellow gamers around the world who are living in fear of political persecution. We are leading responsibly by organizing acts of peaceful political protests. And we'll keep fighting until Blizzard makes this right, because we believe that our world is worth fighting for.

If you don't want to support Blizzard anymore, you can find instructions for how to delete your Battle.Net account below:

Immutable — the studio behind card game Gods Unchained — offered to pay for Ng Wai Chung’s lost tournament winnings, and granted him free entry into their upcoming $500K tournament. So if you’ve been playing Hearthstone, why not try out Gods Unchained instead? And if you’ve been playing other games developed or published by Activision Blizzard, consider trying a better, more ethical alternative:

WHAT PEOPLE ARE SAYING

I've received a lot of questions from the press and everyone so I wrote this information sheet. I'm happy to answer specific questions but this is a pretty thorough analysis of the recent events. https://t.co/nShzTwIIuU

Blizzard shows it is willing to humiliate itself to please the Chinese Communist Party. No American company should censor calls for freedom to make a quick buck. https://t.co/rJBeXUiwYS

Recognize what’s happening here. People who don’t live in #China must either self censor or face dismissal & suspensions. China using access to market as leverage to crush free speech globally. Implications of this will be felt long after everyone in U.S. politics today is gone. https://t.co/Cx3tkWc7r6

Not everyone at Blizzard agrees with what happened.

Both the "Think Globally" and "Every Voice Matters" values have been covered up by incensed employees this morning. pic.twitter.com/I7nAYUes6Q

BlizzCon may have a Hong Kong protest: @fightfortheftr is calling for an umbrella protest of gamers, redditors and freedom activists.

"They have no idea what kind of Internet shitstorm they've unleashed."

I've been a Blizzard fan most of my life. I started playing Vanilla when I was around 11. I will not support a company that Kowtows to a Communist Regime. You're an American Company, Fucking act like it @Blizzard_Ent #BoycottBlizard

Blizzard is now censoring their forums for anyone voicing concern about the situation. #BoycottBlizard pic.twitter.com/VZtcRrD1QY